Whoa hey, thanks for holding the door! I mean, assuming you were pushing the doors-open button and not the doors-closed button, haha. Ever wondered what to say in awkward conversations like this one? Well, what you need is WIT, and by wit I mean spontaneous creativity. This book is the result of deep dive into the backstories of some of the wittiest people who ever lived — Great Wits ranging from Oscar Wilde to Jay-Z. The goal: To find out what made them so witty, and what we can learn from it. Oh, and it’s zippy and fun and filled with cartoons and quizzes and zingers freely available for your use next time you’re stuck in an elevator like this one. Here’s my floor. Bye!

"He had the look of one who had drunk the cup of life and found a dead beetle at the bottom." - P.G. Wodehouse

"The radio station was playing Tchaikovsky's Swan Lake, a sure sign that things were much worse than they appeared" - @Shteyngart

To miss @PaisleyRekdal's Mae West poems is to omit elan from your life.
https://wit.substack.com/p/is-mae-west-a-palindrome-on?r=457f&utm_campaign=post&utm_medium=web&utm_source=twitter

"I'm going to memorize your name and throw my head away." - Oscar Levant

"I don’t like Chinese food, but I don’t write articles trying to prove it doesn’t exist." - Tina Fey 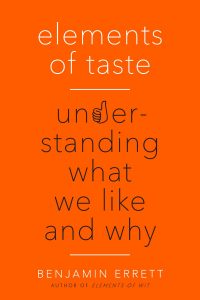 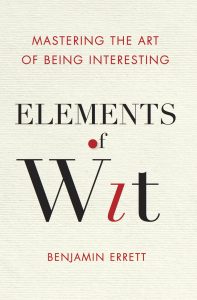 Elements of Taste was published in 2017 by TarcherPerigee and is available at: Amazon • Barnes & Noble • Books A Million • Penguin Random House • Amazon.ca • Indigo.ca

Elements of Wit was published in 2014 by Perigee and is available at: • Amazon • Barnes & Noble • Books A Million • Penguin Random House • Amazon.ca • Indigo.ca